SOME vacation destinations attract tourists. Others attract disciples. The surfer town of Puerto Viejo de Talamanca and the tiny beach communities southeast of it, on the Caribbean coast of Costa Rica, are of the latter variety. 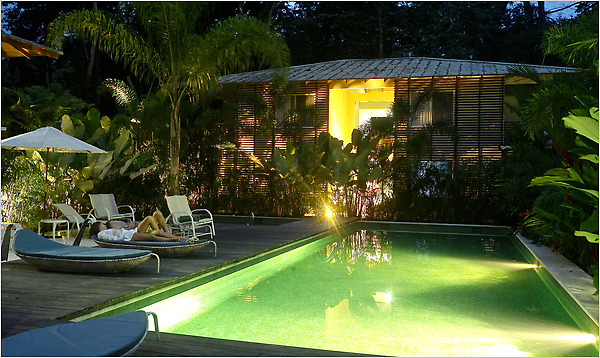 This wild, often overlooked coastal stretch, an 11-mile-long necklace of small sandy coves located in southern Limón province, may be in one of Costa Rica’s poorest areas, but it’s also one of the most diverse, populated by a blend of Costa Ricans, English-speaking Afro-Caribbeans, indigenous Cabecar and Bribri Indians, and plenty of expatriates, from French fashion designers to old German hippies.

Drive south beyond the small village of Puerto Viejo, a tiny grid of streets lined with scrappy surf bars and cafes with names like Peace & Love and EZ Times, and you’ll find pristine beaches where palm trees bend and sway over the water’s edge. Reggae music emanates from cheerful pastel-painted shacks that line a rutted, mostly dirt road. An old-growth forest, often just yards from the shore, is alive with sloths, toucans and monkeys.

For soul-searching world travelers who tend to plant roots and stay, it’s this laid-back, untamed vibe that has made the Caribbean-side strip, between Puerto Viejo and the equally tiny town of Manzanillo, an attractive alternative to Costa Rica’s more touristy Pacific coast.

“Coming here is about living with nature,” said Nicolas Buffile, a French expatriate who owns the Shawandha Lodge, a chic “neo-primitive-style” property. “We’re not like the Pacific side, where everything is air-conditioned and tamed.” His daughter Paola, who manages Residencia Las Casas, a luxurious holiday rental in the area, added: “People who go to the Pacific side don’t want their life to change. The people that come here want to change their life.”

Even the local surfers tend to be particularly fanatical about the area — and, more specifically, the famous wave known as Salsa Brava (Wild Sauce), which breaks a few hundred yards from Puerto Viejo’s shore. When this Hawaiian-style barrel swells, it’s considered the most powerful wave in Costa Rica. It’s also an appropriate analogy for the surrounding area: beautiful and wild. The surfers who ride it tend to be hardcore adrenaline addicts.

Needless to say, neither Salsa Brava nor Puerto Viejo is for the traveler who likes to be pampered. In fact, for years, careful travelers and tour operators avoided the region thanks to its reputation as a frenetic, rough-and-tumble kind of place. And while petty theft is still an issue, a boom of new restaurants and hotels catering to a more sophisticated traveler has softened the edges some. And upscale tour operators like Wildland Adventures have decided that the Caribbean Costa Rican coast is now safe enough to begin tours in the area.

The Costa Rican government is also investing in the region. Over the next few years about $80 million has been allotted for development in the province, focused on Puerto Limón, its shabby main port town, about 35 miles northwest of Puerto Viejo. And attention is already turning to the town. Last year it served as the finish line for the Transat Jacques Vabre yacht race; this year four cruise lines — Royal Caribbean, Princess Cruises, Holland America and Carnival Cruises — added Limón as a port of call.

An example of this new luxury is Le Caméléon, the area’s first luxury boutique hotel located just south of Puerto Viejo, which was inaugurated a year ago by the president of Costa Rica, Óscar Arias, himself. The property has 23 all-white rooms spread out among three two-story glass and wood buildings that embrace a palm-lined pool. Another low-lying building behind the lobby houses a trendy bar and restaurant, and across the street is an exclusive beach club, with curtained day beds and bar service. Although the complex is designed to blend into the landscape, its Miami-style design sticks out like an Armani-clad banker among barefoot bohemians.

More characteristic to the scene is Jungle Love, an intimate open-air restaurant owned by two American expatriates, Yamu Myles and Poppy Williams. Situated behind some thick foliage across the road from Playa Chiquita, at night it gives off a cozy glow. The soundtrack tends toward soul and funk tunes, while the menu offers healthy comfort food like chipotle chicken and tuna in a tamarindo sauce with wasabi and brown rice.

Mr. Myles, who hails from Oakland, Calif., was once a successful D.J. Now he’s the chef at Jungle Love. “There’s a spark to this place,” he said. “I loved it the moment I got here. I always say ‘Get in where you fit in.’ ”

Paul Johnson and his wife, Jeanne, both originally from Minnesota, are two other born-again Puerto Viejo residents. Every Saturday, you’ll find Mr. Johnson at the town’s weekly farmers’ market selling organic coffee beans, dairy products and chocolate from a cooler and a rickety card table. He and his wife came down about six years ago when, after 10 years of trying to have a child, they decided to “live an adventurous life focusing on doing things for other people.”

A year after they moved to Puerto Viejo, Mrs. Johnson became pregnant — but they stayed anyway and founded Caribeans, a fair trade organic coffee company (they’ve since added cocoa to their offerings). It’s headquartered in the colorful and always buzzing Caribeans Café, a seaside shack painted a sunny shade of yellow. Coffee beans are roasted in the back and then served up in an excellent brew, along with organic ice cream, up front.

Farther south down the coast in Manzanillo, the tree trunks are painted with Rasta colors and many of the residents still fish for a living. The undeniable heart of the town is Maxi’s, a slapped together, locally owned two-story bar and restaurant that looks over the waves and serves as a meeting place for locals and tourists.

The town also serves as an entry point to the Gandoca-Manzanillo Wildlife Refuge, more than 12,000 acres of jungle, beaches and coral reefs. Florentino Grenald, a charismatic local guide better known as Tino, offers a four-hour hike into the refuge. Keeping up a lively and informative dialogue, Mr. Grenald points out so-called Velcro plants (after their ability to stick to passers-by) and bullet ants; tracks red-eyed tree frogs; and calls out to the howler monkeys that scramble in the trees overhead.

“In the last few years I’ve noticed things disappearing,” he said. He stopped in front of a slender gray tree covered with multiple small growths and added, “But I’ve also noticed new things coming in.” He touched the tree and suddenly the bumps came alive. Small gray cicada-like insects flew into the air and hovered; they all had long, feathery white tails, like tiny boas. Much like the evolving Puerto Viejo, their presence seemed both transcendental and a little fierce.

HOW TO GET THERE

Multiple airlines fly from New York to Juan Santamaría International Airport in San José, Costa Rica (SJO). A Web search found nonstop flights in mid-April on Continental, leaving from Newark, starting at about $540. (Flights with stopovers were as low as $330.) While there are puddle jumper flights to Puerto Limón, it’s easier to rent a car (four-wheel drive recommended) and take the four-hour trip by road. Daily shuttle buses run by companies like Interbus or Gray Line also make the trip. Expect to pay about $35 per person each way; there is sometimes an additional $10 charge for luggage. (United States dollars are widely accepted in Costa Rica.)

The 23 rooms at Le Caméléon (between Puerto Viejo and Cocles Beach) are spread among three glass and wood buildings that embrace a foliage-lined pool.

WHERE TO EAT AND DRINK

The lively but rustic Caribeans Café (Puerto Viejo) is a great place for breakfast or an afternoon milkshake.

The ceviche may be a little rubbery but the vibe at Maxi’s Bar and Restaurant (Manzanillo) is always authentic and sea-breeze fresh. On Saturday night the place is hopping.

If you tire of casual beach fare, make a reservation at the elegant Italian restaurant La Pecora Nera (near Cocles Beach).

Have you seen our new DVD on scuba diving, fishing & adventure in Costa Rica? If not: GO HERE

Our agents can set up the all inclusive or al a carte vacation package and itinerary you want throughout the country. There is no charge for our service and we’ll save you money and lots of time and you’ll get the vacation you want.  Bill  Beard’s reservation office is located in La Fortuna, Costa Rica in the  shadow of Arenal Volcano, behind the Catholic Church near the world famous hot springs.

With the Surfers on Costa Rica’s Untamed Coast