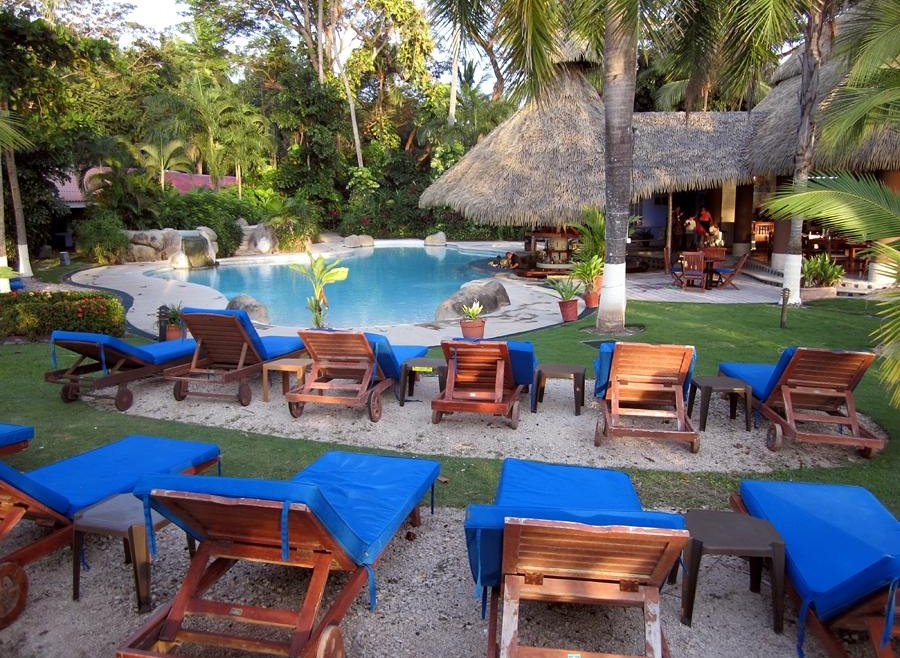 Named for its celestial-blue waters, the river is the main attraction of Guanacaste’s Tenorio Volcano National Park.

Los Tenideros, where the waters of two streams merge and the river takes on its unique coloration. Courtesy of Bruno Carayon

In the middle of dense tropical forest lies a hidden jewel of Costa Rica. It starts with a walk through the jungle at Tenorio Volcano National Park, in the northwestern Guanacaste province. Every step in this forest is more inviting than the last. During the rainy season, the smell of wet earth permeates the air, droplets of rain fall constantly, and the sounds of exotic birds accompany hikers.

After about 15 minutes of walking in the jungle, a new sound becomes audible: Water is flowing and falling somewhere nearby, hinting at one of the park’s treasures. The main trail splits, and a path leads leftward to a steep descent down muddy steps made of sections of tree trunks. After an unexpected turn, the river finally makes an appearance in the form of an impressive waterfall.

The Rio Celeste’s color is a true natural wonder. Local legend says that when God painted the sky, he washed his blue brushes in this river, and that is how its waters obtained their magnificent blue color.

The steep, sometimes difficult descent to the waterfall is worth it. With the spray from the falls misting your face, their awesome force becomes even more evident. If you’re lucky, blue morpho butterflies may flit over the water, giving rise to the whimsical notion that perhaps they dove into the water to get their wonderful color, or were born behind the falling cascade.

But the wonders of the park don’t stop with the waterfall. Lucky hikers may even spot a group of rare tapirs while walking the three kilometers of trails. Past the falls, the trails cross a natural blue lagoon and continue to the place where all the magic takes place: Los Tenideros, where two clear-water streams merge to form a larger current. When their waters combine, the water turns blue in front of hiker’s eyes. What seems like magic is the result of chemical reactions of volcanic minerals such as sulfur and calcium carbonates. The park also has hot springs, though bathing in any of the waters in the park is prohibited.

Although Tenorio park is perhaps one of the most interesting places in Costa Rica, it remains a well-kept secret. Only 18,000 people visit the park annually, compared to the 150,000 visitors received by Manuel Antonio National Park on the central Pacific coast.

Among the challenges Tenorio faces is deteriorating infrastructure. The park was established as a conservation area in 1995, and most of its infrastructure was built three years later. Over time, the trails in the nearly 12,900-hectare park have suffered serious degradation.

We are always struggling to keep the trails in good shape. Materials have a hard time with the high levels of humidity we have here, explained park manager Vilmar Villalobos.
Rio Celeste 1

A waterfall tumbles into a pool of surreal blue water on the Rio Celeste in Tenorio Volcano National Park. Courtesy of Bruno Carayon

But the park does have help. Recently, its mirador (viewpoint) was reconstructed with the support of the Costa Rican nongovernmental organization ProParques. Just five years after the original mirador was built, the humidity had completely rotted the wood, making it unsafe for tourists to stand on. ProParques and a number of volunteers helped build a new, safer mirador for the national park.

The structure is made out of [recycled] plastic wood, Villalobos said.

The park still has many other structural challenges to face. The steep descent to the waterfall remains dangerous. For the past several years, the park’s administration has been struggling to gather the funds necessary to take care of this problem. Recently it obtained ₡10 million ($20,000) from the Spanish Agency for International Development Cooperation to start working on that part of the trail; however, that sum will cover only half the cost.

Money is not the only problem. Any structural need in the middle of the jungle is a struggle. Building materials have to be hauled on worker’s backs for 1.5 kilometers into the rain forest.

“Another of our top necessities is an ATV to transport materials into the forest,” Villalobos said. He explained that construction of the mirador was made possible only with the help of volunteers, who made a human relay in which materials changed shoulders every 200 meters and were brought two kilometers into the jungle.

But the park’s administrative team has proven before that perseverance and hard work pay off.

“Tapirs are an important part of our national park, so last year we decided to launch a campaign for their protection”, Villalobos said. The conservation campaign, Salvemos el Hogar de la Danta (Save the Home of the Tapir), consisted of creating stickers and books and partnering with the University of Modena in Italy to sell them on campus. The program raised enough money to buy 20 more hectares of land to add to the national park, Villalobos said.

If we launched this project again, we could raise money to buy night cameras and conduct research on the species, he added.

Join us for a unique hike in the Ternorio Volcanic park. We leave Fortuna at Arenal Volcano heading towards the village of Guatuzo. Once there our hike will begin around 9:00am at the trail head for our 3 to 4 hour hike to the beautiful celestial blue waters consisting of two pristine brooks that meet forming the perfect chemistry to create agua blue colored waters. As we walk through the Rain Forest, we will visit the Tenideros where the river gets its colour, the Turquoise waterfall, the Turquoise swimming hole and the hot spring . Lunch will be served at the trail head after refreshing, we will return to La Fortuna around 4:30pm
4:00 PM.